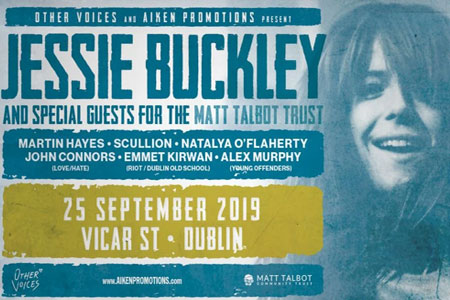 Previously, it was announced that Jessie Buckley and special guests will perform at a special night for The Matt Talbot Community Trust. Now, these special guests have finally been revealed. Today, Other Voices and Aiken Promotions unveiled the complete line-up for the event at Vicar St.

The special night for The Matt Talbot Community Trust will take place on September 25 at Vicar St. Tickets (priced €35 inclusive of booking fee) are available now from Ticketmaster.

The Matt Talbot Trust is a “Community within a community” whose home has been in Ballyfermot since 1986. It was founded by Sr Caoimhin Ni Uallachain from her home in Chapelizod.

The centre runs education and support programmes for people who for many reasons have found themselves outside the education system. They promote stability and structure to those in the community who have become marginalised. After a recent fire on the premises every effort is being made to rebuild and restore all services.