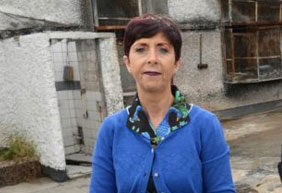 A day after the Matt Talbot Community Trust’s IT system and website crashed, director Gráinne Jennings is getting the place back up and running.

Upstairs in the Ballyfermot centre’s makeshift office, she is surrounded by a jumble of hard drives, folders and mounds of paper that have yet to find a permanent home. The technology glitch is the latest in a series of setbacks for the trust, which runs training and support programmes for people who have found themselves outside of the education system.

Late last year, the centre’s back building was set ablaze – the origin of the fire is unknown – gutting the kitchen, workshop and computer space.

“We are really restricted in what we can offer at the moment,” says Jennings, who must now hotdesk around the building. “The fire was devastating, as we have just the one building to work in now.”

The charred remains of the building have been untouched since the incident, but the trust is pinning its hopes on an upcoming fundraiser, featuring singer and star of the movie Wild Rose and the acclaimed TV drama Chernobyl, Jessie Buckley. Buckley has been a “silent supporter” of the trust for many years, says Jennings.

“When she heard about the fire she decided she would step up to do all she could to help. We can’t thank her enough,” Jennings says.

Despite the chaotic circumstances, the centre exudes the warmth of a friendly relative’s home. Programme participants, some of whom are former drug addicts or ex-offenders, pause what they are doing to smile and say hello, while cups of tea are offered with the persistence of a doting grandmother.

Food has a therapeutic purpose at the centre, says Jennings. Before it was burned out, the kitchen used to welcome former participants and community members who would wander in unannounced to eat with those currently on the programme.

The bunker-like building in the west Dublin suburb was “never fit for purpose anyway”, says Jennings. The fire, while financially devastating, allows them to “reimagine what’s on offer here”, she adds.

“All of a sudden we can start to dream in a different way in terms of how the centre can work. It really is a great opportunity for us to reorganise the space to deliver the programme in a complimentary way.”

Positivity and persistence against all odds are key principles the centre teaches its participants, says Jennings. A reimagining of the space could bring about Jennings’s dream of an “edible community”, which would allow participants and community members to bond over the food they grow together.

“It will give the people coming to us a wider purpose and it will also give the community a better understanding of the people we work with.”

Cooking is one of the “soft skills” participants learn as part of the centre’s Future Options programme.

“We would have guys coming to us who have been in prison for 18 years. This is their first time out of the prison system, so these skills are fundamental.”

Confidence
The programme aims to build confidence in participants, allowing them to explore different interests and routes into mainstream life. As well as cooking, those enrolled take workplace tours and placements, while also identifying personal barriers to employment or further education.

Addicted to drugs since he was a teenager, former programme participant John Farrell believes the Matt Talbot centre is far superior to any of the other community programmes he went through.

“At any other project, they care about you while you’re there but you’re a number. The more numbers they have the larger piece of pie they get for funding,” he says. “Here they let me do me and slowly their actions broke it down for me. They actually cared about me, and that made a massive difference,” he adds.

Farrell now gives talks about addiction recovery at homeless hostels and in drug programmes. After completing a start your own business course, he has also set up a small enterprise, carving family crests and Celtic scenes into copper in a small office at the centre. He sells his engravings on Facebook and through word of mouth. He also teaches copperwork to the programme’s participants.

“Here they gave me the opportunities to do work I was passionate about. If I told Gráinne I wanted to be an astronaut or a six-foot-tall model, she would never refuse me. If she sees you are willing to work for it she will bend over backwards for you,” he says.

“That is what I love about here. The belief they have in people no matter how broken they are. And with the right support and help, they can be fixed and go on to help others,” Farrell adds.

The trust is asking the public to help them rebuild the centre by buying tickets to see Jessie Buckley and others perform at Vicar Street, Dublin on Wednesday, September 25th. Tickets €35 through Ticketmaster.